Series: "Put a Ring On It"
Acrylic on canvas
Number in collection: 6 handbags


"I think that it’s really cool that people see different things in my art based on their personal experiences. Some see very specific things that I'd never even considered.”

An interview with Jason Lessans

Jason Lessans can teach us a few things about using art as a restorative practice; the engineer-yogi exercises both sides of his brain when doing his artwork. A Maryland native, Jason found his niche in Tyson’s Corner, Virginia, where he works as a data systems engineer within the technology industry by day, and by night finds ever-artistic ways to relieve stress from that aforementioned day. Sometimes this means picking up his guitar to play a few riffs or banging it out on his drums, but most often it’s the visual arts that serve as his ideal form of escape artistry.

In hindsight Jason recognizes a thread of happiness that art has brought to him throughout his life, whether beaming with pride after showcasing art-camp creations as a child or opting for art classes during his college career. A double-major in engineering and economics, he deduced that engineering might make for a more lucrative path than art, yet he invests loads of time and energy into his art for the love of it. He says, “I'm constantly in that analytical, mathematical mode, which wears on me I guess. So I found that taking a couple hours a night to do something creative helps to balance everything out by using the other side of my brain.”

One way that you won’t find Jason unwinding from his tech job: on the computer. Self-admittedly, Jason doesn’t love social media, but it certainly loves him. He exudes an aw-shucks charm about his rise to fame on Instagram, quickly accruing nearly 10k followers after reluctantly posting some of his work—convinced to do so by a friend. He says, “At first I was like, "What's the point? Nobody's going to see it. So needless to say I was surprised by the growing interest.”

Jason enjoys abstraction in all forms and is perhaps best known for his fluid art showcased in his Cetuvi collection. His hypnotic ring-pour series utilizes science, precision, patience and a little bit of letting go. Instead of working with a brush, he uses various techniques to apply paint to the canvas. The method used to create the individually painted canvases embedded inside this handbag series was done by using various-sized cups filled with paint and pouring them out in circular motions. “I don't necessarily have an idea in mind when I'm painting. I try to just let my subconscious take over. So there isn't a specific goal that I'm trying to achieve, yet there are quite a few technical aspects at play.” One could actually credit his analytical mind for accomplishing such a perfect balance of hues, having studied and tested results with his laboratory-style curiosity. “I'm trying to get the right paint consistency, my paint recipe if you will. And it can take more than an hour just to mix the paints,” says Jason, “it did take some practice to get more control and achieve more defined lines.”

He’s worked at mastering other brush-alternative methods, ranging from dragging paint over canvases with either a pallet knife or even paper towels. Maybe it’s just all this talk of weird science, but we noticed some of his work resembles cellulose, bubble-like formations. To achieve this effect he sometimes incorporates silicon or oil and other times it’s just the result of a swiping technique mixed with particular paint viscosities.

When asking Jason what he sees in the “Put a Ring on It” series, he claims that it often reminds him of desert contour maps. And adds, “Other times I see tunnels and different things. But what I find most fascinating is what other people see.” He notes that right now he’s particularly fond of using black, white, and gold as his primary colors because it exudes a certain elegance and flow.

Flow for Jason can also be found in yoga and meditation, which he practices as a form of exercise and to reset the mind. The photo on this page is Jason meditating on a precipice at the UNESCO desert fortress, Masada, in Israel. Maybe we’re biased, but we think the rock formations look strikingly similar to his Cetuvi handbags. “Sunrise on the top of Masada was a magical place and certainly could be likened to what I created for the handbags, but honestly, it wasn’t what I set out to do.” Most often, his solace is found in less exotic locales, namely his guest bedroom where he paints. “Well, I had a guest bedroom. It's now occupied full time by canvases and buckets of paint,” laughs Jason. “I go in there and crank up alternative or classic rock and just create.” Thanks Jason, you give new meaning to the Spin Doctors. 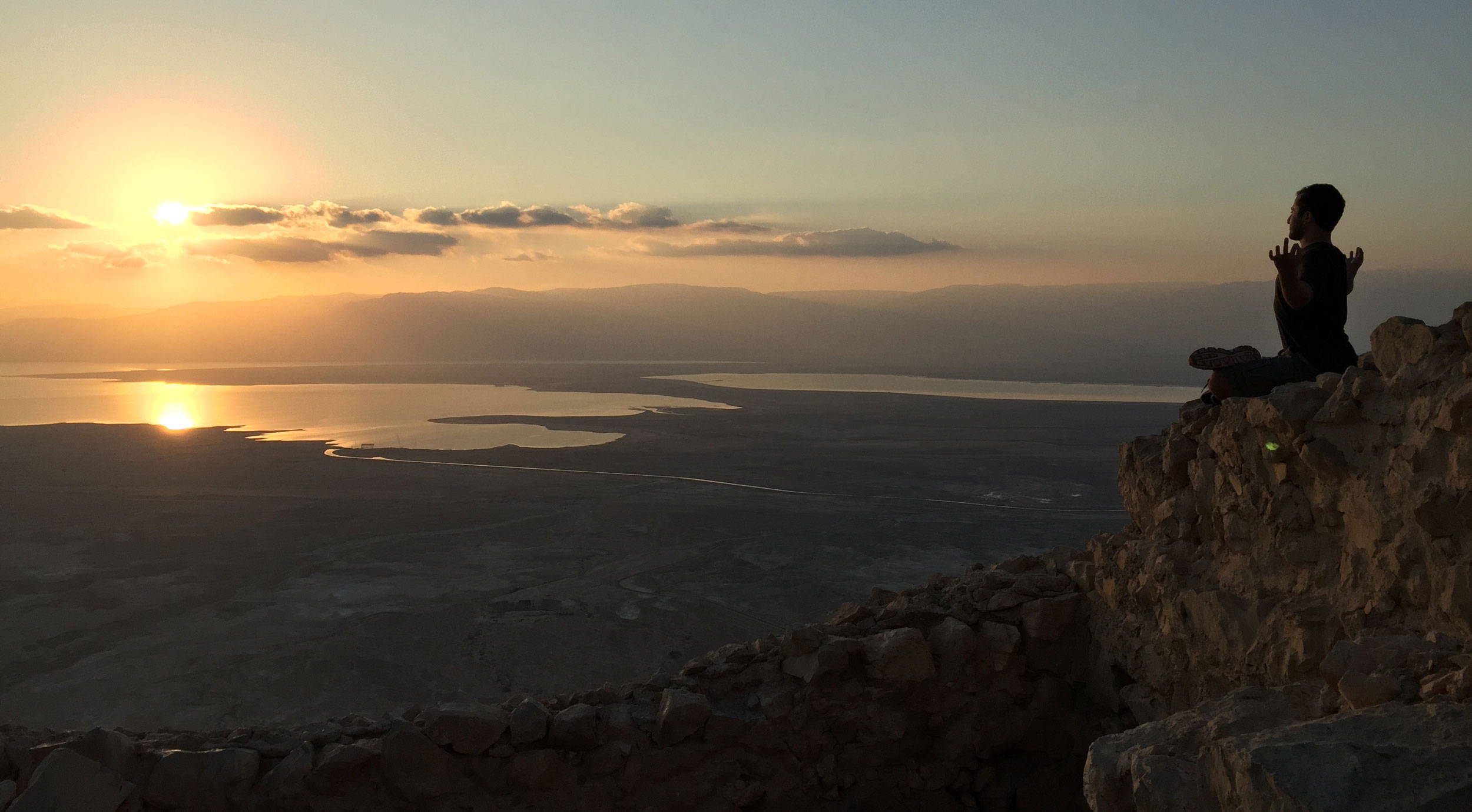 *Full disclosure by Cetuvi: Despite being named “Put a Ring on It,” no pop music was harmed during the making of these handbags. Jason’s only committed relationship is with his beagle-mix rescue, so the only thing he’ll be putting rings on in the near future are his canvases. And, he doesn’t listen to Beyoncé. For a little insight about what Jason does listen to while pouring it on thick, see below. (Found on a Pandora station near you.)