"We are mixing art, fashion, and storytelling into one amazing medium. If we fail, and no one pays attention, we still did it for the love of it! That’s what life’s journey is all about.”

Deemed the “Father of Crop Art” by Dan Rather, having created more than 35 earthworks over the past 40 years, Kansas-based Stan Herd might not seem like a logical choice for mobile art contained within a 10” x 14” space, but we knew that he was the ideal candidate to be one of Cetuvi’s first collaborating artists. This inkling was cemented by one of Stan’s quotes as told by John Hawkes, the Oscar-nominated actor playing Stan in the movie titled “Earthwork” highlighting Stan’s crop-art installation in NYC. He said, “I’m a rebel, I mean I’m trying to be. Because I believe the most daring, outlandish, revolutionary thing you can do in 21st century America is to treat everybody, people you know, people you don’t know, with dignity and kindness whenever possible. Hey, fuck it, it’s something to shoot for.” Not only does it take a great deal of mutual respect and humility for artists to merge their work, Stan is willing to move heaven and earth (well at least earth) to put his personal stamp on his art and he doesn’t let conformity get in the way of getting his point across.

Whether foregoing political divides between Cuba and the U.S. while working with the Castro regime to create a tribute to 19th-century Cuban poet José Martí, employing homeless to assist his efforts in transforming NYC wasteland, or carving Beto O’Rourke into the fields of an Austin, Texas ranch in conjunction with the presidential candidate’s 2019 campaign announcement, he has made sweeping-countryside statements about where he stands on issues with beautiful artistry and finesse.

This series with Cetuvi, “Stan Herd: A Yunnan-imous Tote” is no exception. The collection of 12 10” x 14” totes comprise a deconstructed original oil-on-canvas abstract tribute to indigenous tribeswomen of the Yunnan province on one side, and on the other an oil-on-canvas spelling out “Stan Herd” in Mandarin. Made to be sold as a full collection, when displayed together, the handbags reassemble the original two 48” x 48” works.

This handbag collection serves as a companion piece to one of his newest earthworks, “Young Woman of China,” depicting one of the 50 indigenous ethnic minorities in China, the Yi. The portrait of the indigenous woman spans four acres of sloped terrain facing the foothills of the Himalayan Mountains, just north of Vietnam. Stan hopes to bring light to the country’s recent efforts to embrace China’s minority populations by residents such as the JiCheng Company, who commission the work, and Hongyun Honghe Tobacco Group—both actively involved in helping these populations grow and find sustainability. This depiction also proved poignant for Stan, who 20 years earlier had etched a young Kickapoo Indian woman as well as a Young Woman of Brazil into the soils of his homeland in hopes of creating a larger, more permanent, design near São Paulo.

Of course, there’s no shortage of coverage on artist Stan Herd. He’s known as one of the top 10 portraitists of Obama since his famed 2008 earthwork of the famous democrat, with everyone from National Geographic and Shanghai Daily to that of CNN, CBS, and every other broadcast acronym that has spotlighted this artist’s successes. So instead, we thought we’d give you a glimpse into another side of Stan, his childhood, where the proverbial seed of creativity was planted. Below, a personal letter written by Stan to Cetuvi in June of 2019, while in transit to a Shanghai press conference to celebrate his crop art, “Young Woman of China,” and unveil his new collection of Cetuvi totes. 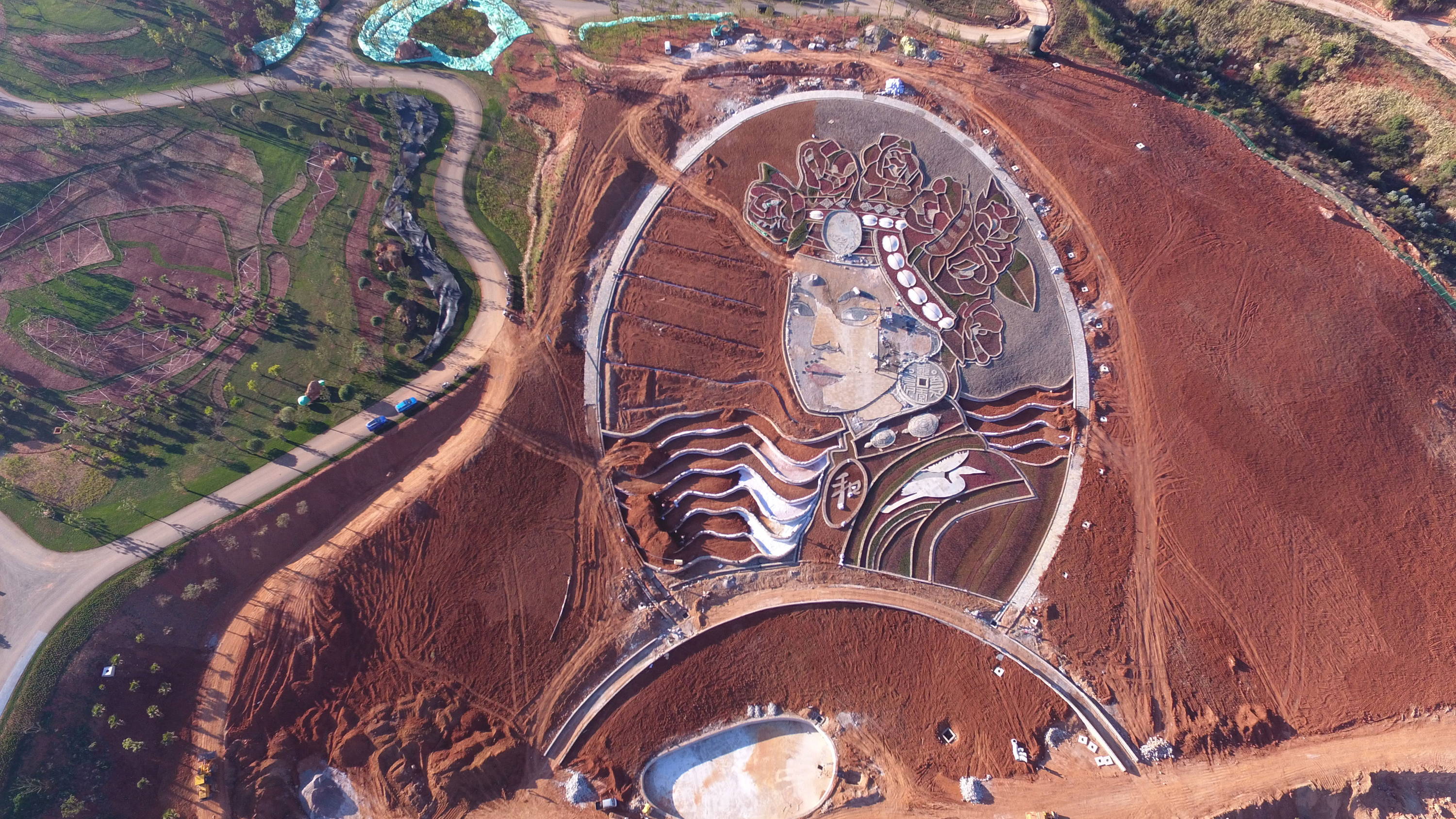 A Letter From Stan Herd

You asked about personal stories from my youth. My earliest art influence was actually a farmer, my father, whose fascination with 'paint by number' captivated me. To see this hard working, no-nonsense guy come in after milking the Jersey and feeding the livestock in the dead of the winter, settle in around the stove with his coffee and paint this quaint image of a frozen lake with a small cabin nestled along its edge in mountain country was exhilarating for me. He would let me open the amazing little containers of each color and apply some to the canvas. I've almost forgotten about this and how much it affected my sense of becoming an artist. I presume I was about 6.

Almost from the time that I could hold a pencil I began to draw. At the age of 8 I drew a scene that included a whale in the ocean, which surprised my parents because you couldn’t actually live any farther away from the ocean than a farm on the plains of Kansas. I had dreams of oceans and far off lands from a very young age. (It’s fitting that I should be writing this while flying over Russia.)

I told my mother around that time that I was going to be a famous artist and that I was going to travel the world and bring her home a mink coat and diamond earrings. I think she believed me. My parents noticed my talent early and sent the drawing off to the biggest newspaper in that part of the state and I won a dollar! They published the drawing in the paper. The die was cast. I would become an artist.

At 14 my parents enrolled me in a mail order program called - ‘Learn to Draw.’ They paid hard earned money to enroll me and I took it very serious indeed. I made mostly straight A’s over the year and mailed my assignments in weekly. By the time I was in high school, in a very small farm town, I was known as the artist in the school, designing backdrops for school plays and activities. I loved the attention I got from my classmates, especially the girls. Another die was cast. I picked up the book “the Agony and the Ecstasy’ about the life of Michelangelo and his journey as an artist, followed by a book on Van Gogh’s amazing story and I was hooked. The artist was heroic to me. This would be my dream.

Not many people know that for a number of years I also dreamed of being on stage with a guitar in my hand. (The Beatles had just landed stateside and I was infatuated like everyone else.) My energies drifted to pursue this possibility and I played in bands off an on for a few years, but it never really grew into anything solid. I still play guitar and sing but the art has always been a way of life for me. I knew this was what I was born to do and I never looked back.

After applying to the Kansas City Art Institute, and getting accepted, I decided to stop off at a smaller college, Wichita State and we settled on this less exotic locale for my first year of academic training. I remember I was shocked at my first nude model and remember being pleased that my work seemed to be in the top levels of my fellow artists, although there were a few exceptionally talented classmates to inspire me.

Circumstances of a deeply personally nature pulled me out of school and into the larger world of survival of the fittest. For a year or two I stopped drawing. My mother bought me a new set of oil paints for Christmas that year and I didn’t have the money for a canvas so I pulled an old window shade off and stretched it over stretcher sticks, painting a single lonely tree from my past life on the farm. The painting won an award in a city show and I was newly invigorated to take up painting again.

Another personal event propelled me to spend a summer back in my hometown and finally dedicate my life to this endeavor of creating a place for myself in the larger art world. After heartbreak from a failed relationship, I accepted a challenge to head south with two new friends, waitresses abandoning their jobs for adventure. I left my bartending job and traveled with them for two months, ending up in Florida, and finally hitchhiking back to my nearly empty apartment in Wichita (where this journey originated). I packed my final belongings and set off for my hometown to escape the feelings of loneliness and doubt. Spending a summer working with my father, sitting at my mothers kitchen table, and working as a heavy equipment operator, pulled me back to the front room of my youth and the completion of my best canvas ever: a detailed image of a stark cottonwood tree with a cattle skull at its base. I had experimented with all the ‘isms,’ abstract expressionism, pointillism, impressionism, and cubism while at Wichita State. My journey was set to take off. That fall, I moved to Dodge City to watch my brother play football and begin to create murals and larger paintings and shortly thereafter embarking on my, now time-honored, earthworks career.

As I am flying this morning, on the way to Shanghai, I am reading an old novel just given to me by a Kiowa man whose grandmother was raised by the tribe’s War Chief, Satanta (White Bear). It feels full circle to be traveling to a place where I am celebrating indigenous peoples while simultaneously being reminded of the “story” I was entrusted to tell with my very first earthwork, a 160-acre depiction of Satanta. After 30 years of moving sand, earth, and vegetation to ensure that no one forgets those who came before them, I feel nostalgic about how far I’ve come.

I love The Yunnan-imous Tote series. It is not only an amazing tribute to the women of China, these handbags serve as time capsules for our personal journeys as well. Jefferson and I shared stories of how craftsmanship and skills we gleaned from our fathers live on in our work. I was quite taken aback when I first saw the video of his handbag creations, his artistic vision and work ethic. I had never considered the possibility of a collaboration on an artwork such as this. I believe this meritage of art forms, combining the skills of two obsessed artists, creates a gestalt, a finished whole, larger than the sum of its parts.